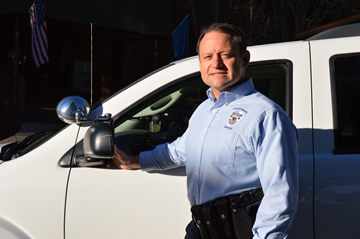 Hans Keller began his career serving the residents of the Incline Village Crystal Bay Township in 1996. Hans completed the P.O.S.T. (Nevada Commission on Peace Officers' Standards and Training) category III peace officer certification in 1996, and then the category I at the High Sierra Regional Law Enforcement Academy in the Truckee Meadows in 2001.  A deputy constable from 1996 to 2011, Constable Keller worked as Chief Bailiff for Incline Justice Court from 2011 to 2015.

He enjoys community volunteer service sharing his time with local youth groups and has served as the vice-president and then president of the local Incline Optimists' Club. On his days away from the Constable's Office, if he is not exploring the abundant mountain bike trails in Tahoe's warm months or dodging the trees on his fat skis during the Winter and Spring days, then he's on the sandy shores of Lake Tahoe tending to a BBQ…. rain or shine.